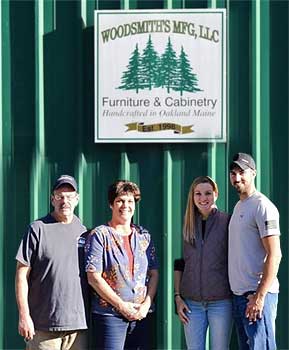 Woodsmith’s Manufacturing started with Rick Smith and his wife Tonya. While Rick worked as a merchant marine, he always used his down time to tinker and make small projects out of different species of wood. Wood working was, and still is, one of his favorite hobbies. It wasn’t until he and his wife Tonya started a family that Rick then took a job working for the local Railroad. He enjoyed the work, but it wasn’t what he truly wanted to do. Rick used his spare time to build different pieces of furniture and eventually was able to sell some to local stores. The Pine Cone Gift and Furniture Store was one of the first stores to acquire Rick’s handywork. At the age of 34, Rick left his job at the Railroad to build furniture full-time from the basement of his home. In 1998, Woodsmith’s Manufacturing was born. Rick’s client list began to grow, and he got his first big break in 2000 when he landed a furniture sale to Chilton’s Furniture and The Mill Mall Furniture (now 304 Stillwater in Bangor). In 2002, Rick and Tonya purchased part of the historic Woolen Mill in Oakland, Maine. They renovated the building, turned it into a suitable working environment and it became the official home of Woodsmith’s Manufacturing. After 21 successful years of business, Rick and Tonya sold Woodsmith’s Manufacturing to a new couple who share the same passion for handcrafted furniture and who will keep Rick’s vision alive. In the fall of 2019, John Templin Jr and his wife Ceara became the new owners of Woodsmith’s.

John, a lineman by trade, grew up in the woods of Smithfield, Maine with his father harvesting logs and driving his father’s skidder. Most of the wood harvested was used for firewood or logs to sell for pulp. Growing up, John would often cut cedar logs into hand-hewn cedar log beds. Some he would sell, some he would keep. It wasn’t until John and Ceara received a sawmill from John’s grandfather as a wedding gift in 2008, that John really started to see the beauty in different species of wood. Cutting a log in different ways exposed different grain patterns and John found it interesting to see just how many boards could be cut from a single log. In 2015, John and Ceara began the project of building their dream home; a hybrid Chalet-style home built with a pine timber frame internal structure and an insulated concrete form outer shell. Ceara, a drafting designer by trade, drafted up the plans for their home and even designed the layout for the kitchen cabinets. John had hopes of building the cabinets himself but with time constraints, was forced to receive quotes from outside manufacturers. Rick Smith from Woodsmith’s Manufacturing drove to Smithfield where John and Ceara were building to measure the room(s) for cabinets. Rick noticed John’s wood working tools, Ceara’s designing skills and the common interest in wood production and handcrafted design. A friendship was formed and the door to a business opportunity was opened.

Today, Woodsmith’s Manufacturing employs 8-10 highly skilled craftsmen with over 100 years of combined experience in the handcrafted furniture and cabinetry industry. The manufacturing facility is still located at the old Woolen Mill site in Oakland and is still building some of the highest quality handcrafted furniture and cabinetry in the state of Maine.